When will it End?

“When will it end?” That’s the question on everyone’s mind about the recent market unpleasantness. I’ll start with the correct answer, “No one knows for sure and anyone who says they do is lying.” However, using market history as a guide, we do think the end might be in sight.

I won’t rehash the fact that these market events are normal here; please read my last two newsletters, We Didn’t Start the Fire and This is Normal, for more about why that’s the case. The thing that makes this so difficult is that most of us aren’t used to it. It’s been such a long time since we’ve dealt with something like this that many have never experienced it and even those who did may have forgotten how it feels.

As you can see from the chart below, this bear market is already longer than any bear or “near bear” we’ve had since the Great Financial Crisis in 2008.[1] The one prior was the “Tech Wreck” around Y2K and then you have to go all the way back to the late 1970s and early 1980s to find bear markets lasting longer than this one. 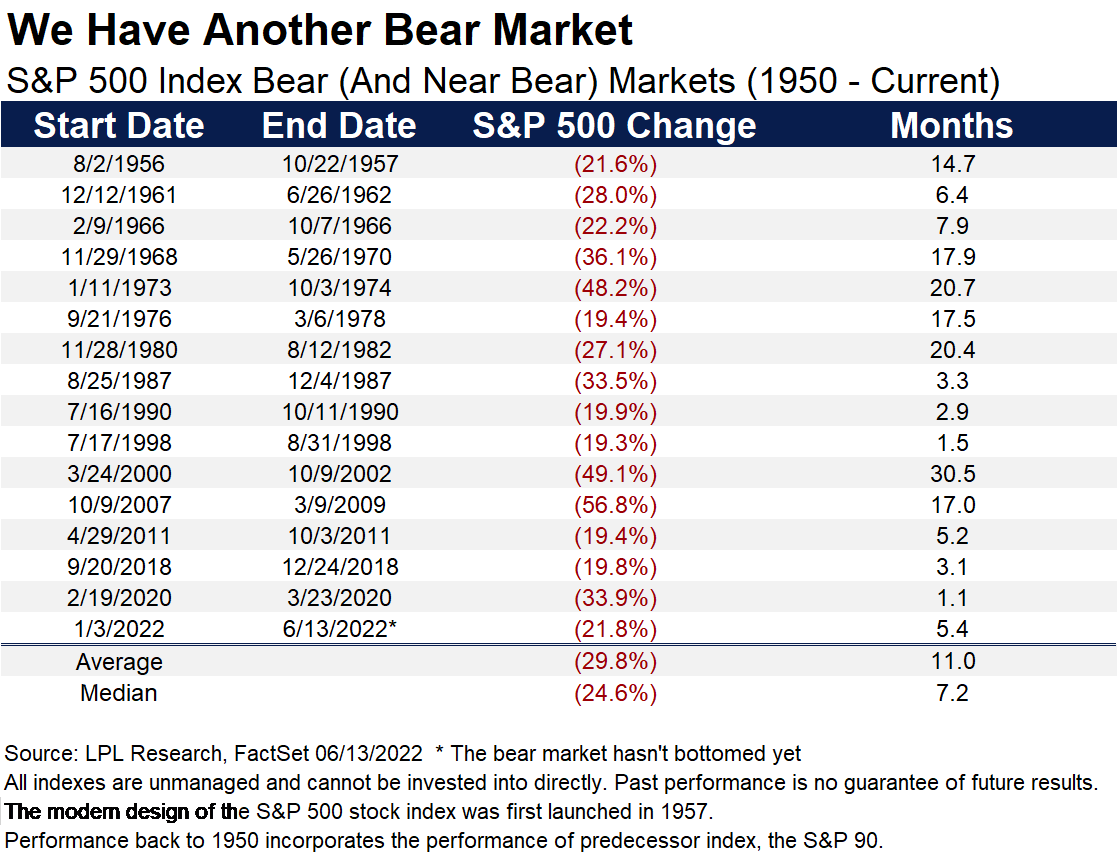 Short lived bear markets are scary at the time, but before things sink in, they’re over. For example, in 2020, we had a bear market worse than this one due to Covid fears. But the market started recovering in just over a month (then doubling from those lows in less than two years). There wasn’t time for dread to really take hold.

This one is a lot slower. We’ve had time to watch it fall, recover some, give up that recovery, and repeat that gut wrenching cycle. We’ve had time to see our account values fall over multiple statements and contemplate what that means – for long-term investors, it means very little and is a chance to buy investments “on sale”, although that’s hard to swallow while it’s happening.

Fortunately, we believe that we’re closer to the bottom than to the top at this point. Bull markets and bear markets don’t die of old age (as the saying goes), but as the bear market lasts longer, we start to expect and then ignore bad news as a coping mechanism. The market then usually starts to recover even if the worst isn’t over.

One positive sign to look out for, as it usually happens near market bottoms, is something called “capitulation” – when people finally throw in the towel and sell out. This might look like a huge down day where the S&P 500 index is down hundreds of points. Or, it could look like days of prolonged intense selling.

Interestingly, from June 8 – June 14, we had five such trading days in a row where the S&P 500 closed lower by at least 1% each day. This chart shows what tends to happen after four such days; green is my favorite color and that chart has a lot of green on it.

Of the nine times that’s happened since 1950, the S&P 500 is higher for most of them six months later and for all of them one year later. Hopefully history will repeat itself.

So, when will it end? We don’t know for sure so the best we can do is continue doing what we’re doing. Timing the market in and out doesn’t work, so we continue to invest in things that we believe will weather the storm and do better in the recovery on the other side. If this is difficult for you, you’re not alone; please give us a call so we can talk.

Starting with this quarter, we’ve decided to pull back the curtain a little bit to discuss why we hold the stocks that we do. We’ll discuss some of our better performers, worse performers, new positions we bought, and positions we pulled the plug on for the previous quarter.

A few disclosures before we begin:

Now that we’ve got that out of the way…

[1] A bear market is typically defined as when an index is down at least 20% from all-time highs. When someone says we’re in a “bear market” in stocks, they typically mean that the S&P500 index is down at least that far (although one can have a bear market in other markets like tech stocks, bonds, housing etc). A near bear is when it is close to 20% down but didn’t officially make it there.

[2] I say “similar” because we customize portfolios based on differing goals, risk tolerances, and timing of transactions. So, the size of positions and account performance, both in absolute and relative terms, will be different.