We Didn’t Start the Fire

In September of 1989, Billy Joel released his hit single “We Didn’t Start the Fire”. The idea stemmed from a conversation that Joel had with a friend who said how terrible it currently is and how life was better “back then”. So, in the lyrics, Joel lists out 118 major events that occurred just during his life up to that point.

Despite having been written over 30 years ago, the song is still popular. Why? Because it's human nature to worry so it still resonates with us (plus, it's catchy!). Today, we are concerned about supply chain issues, inflation at its highest since the early 1980s, the Fed raising interest rates to try to control that inflation, and a potential invasion of Ukraine by Russia. The market has been going down recently because of it. At least, those are the reasons given although sometimes the market does what the market does.

The thing about it is that there’s always something to worry about. The chart below shows the S&P 500 from 1926 through 2021 along with many of the major things to worry about during that timeframe.[1] 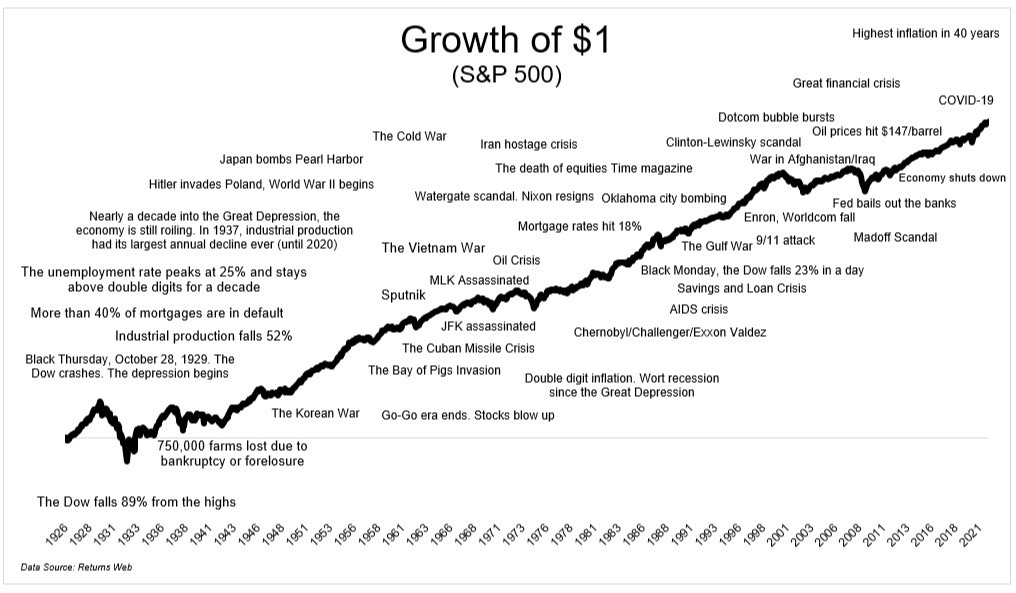 The Great Depression with a decade of double-digit unemployment, World War II with an attack directly on American soil, worry about nuclear attacks during the Cold War, prolonged double-digit inflation in the 1970s, high oil prices … despite all that, the chart in general goes up and to the right.

People like to see patterns and make predictions. It's human nature and important for survival. When it comes to the market though, many times they are wrong; occasionally someone gets it right and rides that fame for the rest of their career, never needing to be right again. The chart below shows the S&P 500, 2012-2018, along with headlines of doom and gloom by some really smart people.[2]

Notice the ending date of 8/24/2018 and the price of 2874.69. Today, despite everything that’s happened since (impeachments, Covid, elections, inflation, expected Fed tightening, Russia), the S&P 500 is above 4200, about 46% higher than the end of the chart. Puts things into perspective.

Like buying a ticket to a theme park, volatility is the cost of admission. And, like the sticker shock from buying tickets to the better parks, stomaching volatility is hard. But, if equities only went up, there would be no risk and thus there would be no extra reward for taking that risk. Bank accounts don’t have volatility, but they also have minimal return (and a negative real return inflation adjusted). The only time volatility really hurts is if you take money out of the market and lock in the loss.

As always, past performance does not guarantee future results, but since the fire “was always burning, since the world’s been turning”, we cannot make decisions based on the fear we feel on the way down just as we cannot based on the greed we feel on the way up. We have to look at volatility as an opportunity to buy something on sale compared to where it was even if it sometimes continues getting cheaper.

Please call us to talk if you’re feeling anxious. That’s what we’re here for.

[2] Source: Chart of shame: The S&P 500 vs. everyone who said the market was about to crash - MarketWatch

Content in this material is for informational purposes only and not intended to provide specific  advice for recommendations for any individual.  All performance referenced is historical and is no guarantee future results.  All indices are unmanaged and may not be invested into directly.