Midterm Elections: Should We Worry?

Usually people worry about elections and their effect on the markets, although that seems overshadowed this year by the other problems we’re dealing with. Most believe that if their party wins, everything will be great, but if the other side wins, life will end as we know it. While it’s understandable to want to have the country be run by the people whose beliefs align with our own, fortunately, who runs the country has traditionally had little effect on the markets.

Capital Group, home of the American Funds mutual fund family, wrote an interesting article about midterm elections. While the whole thing is worth your time to read, I want to highlight a couple of things.

Section Two points out that the returns during midterm years on average lag other years and tend to really start in October when the uncertainty around elections is somewhat dissipated. It’s not surprising considering that all we hear during election years is how terrible everything is and how the candidate is going to fix everything. Normally small issues are blown out of proportion to allow candidates to blame each other - they truly make mountains out of molehills. 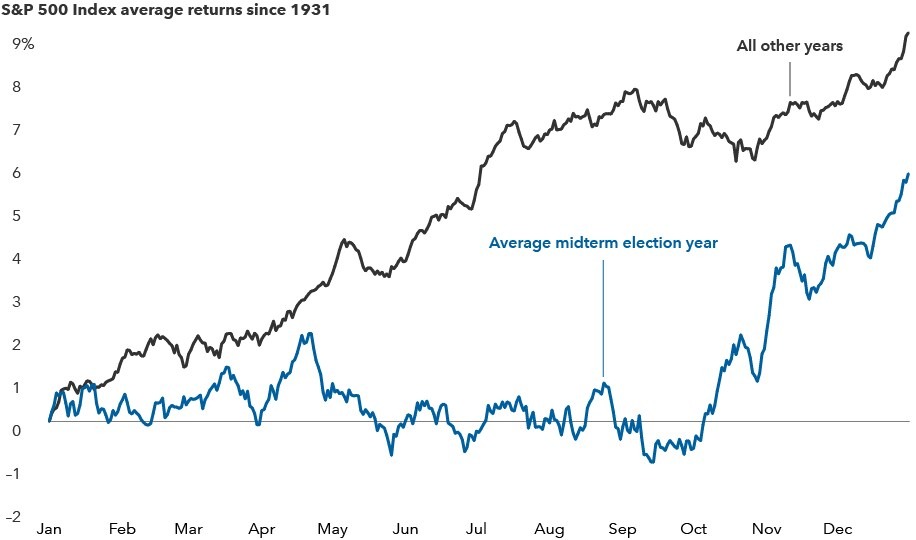 The issue with average is that in some years, the big move could start early and so waiting until October means you miss it. Or, it could start late and buying in October means you might have more volatility to put up with. Studies have shown trying to time the market is extremely difficult to get right consistently. Plus, as the chart shows, staying invested means volatility around zero plus or minus a few percentage points on average, not a big decline (this year notwithstanding), so the risk is usually small relative to missing out when it moves.

Section Four shows that historically, market returns after midterm elections have been strong. 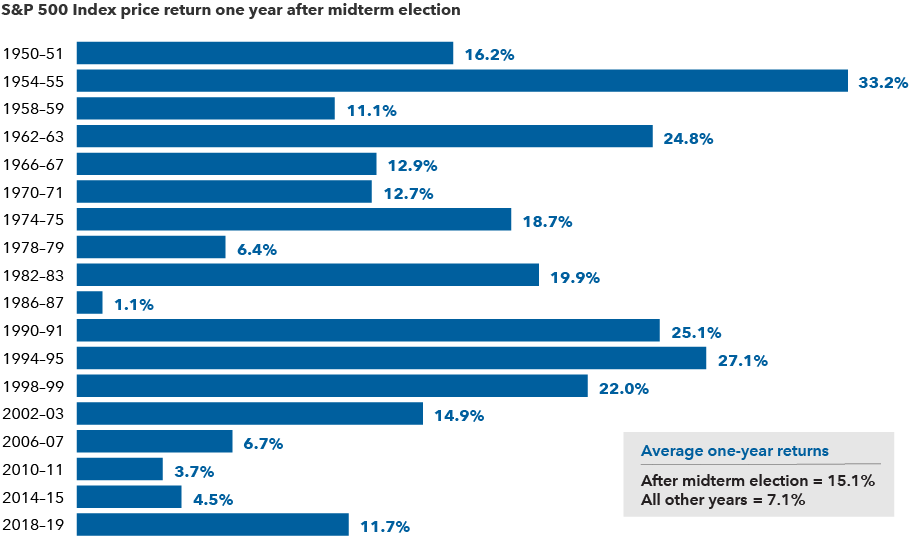 As you can see, the one-year return after a midterm election has averaged 15.1% while all other years average 7.1%. Obviously, we cannot know for sure that next year will be great (see 1987 in the chart). But, the point is that markets tend to do better when there is certainty and knowing who the leaders are brings that to the market.

The chart below from CNBC (source) shows what has happened in different scenarios of control of Congress and the Presidency.

After such a great bull market last decade and with all the other issues we’re going through mentioned earlier, I’m not sure we’ll see those numbers. Or, with the market down so much this year already, next year could be even better. We never want to suggest that we can predict market direction on short timeframes. We are bulls on the market long-term though and try not to focus too much on the short-term fluctuations. But it's good to know that the political environment we’re heading into has tended to be good for portfolios.

The Standard & Poor's 500 Index is a capitalization weighted index of 500 stocks designed to measure performance of the broad domestic economy through changes in the aggregate market value of 500 stocks representing all major industries.