It’s a Feature, Not a Bug

Last quarter was disappointing to say the least. In my last article, When Will it End?, I was hopeful that the S&P 500 index being down by at least 1% for four days in a row early in June might mark a bit of capitulation – the last bit of strong selling that tends to happen before markets recover.

The disappointing part is that I was right … for a little while. Despite all the issues, the market seemed to have moved on. That is what tends to happen during a market recovery; there’s even a saying for it: “climbing the wall of worry”. The market is forward looking so despite all the things people still worry about on Main Street, Wall Street decides it’s priced in and the buying begins. Values of equities rise and then the rest of the economy eventually recovers as well. That’s why market timing is such a bad idea: by the time you feel good about buying, you’ve missed a lot of the returns.

But, my (our!) hopes have been dashed by a confluence of factors: 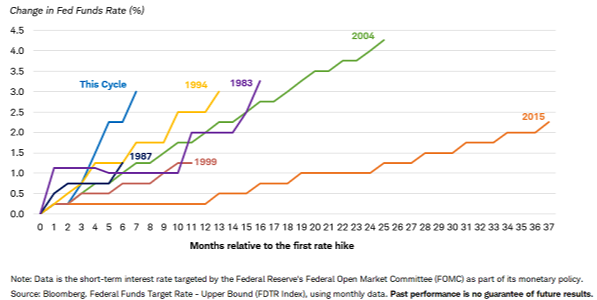 So, unfortunately, as I write this, the market is back to the lows from June. The hope was we’d never see those again, but here we are.

There’s a saying in software development, “It’s a feature, not a bug.”, that refers to things working as intended but that might appear to the end user as a flaw in the programming. For example, the end user clicks a file and presses Delete, but the file is not deleted (bug); the behavior is as intended since the end user didn’t have administrative permissions to delete the file (feature).

The thing to remember is that during bear markets, there can be times where large bear market rallies occur. The market seems to be righting itself, something causes it to stumble, and lower it goes.

Here is a chart from the Great Financial Crisis in 2008 that shows multiple bear market rallies of up to 24% before it did finally bottom out in early 2009. [2] 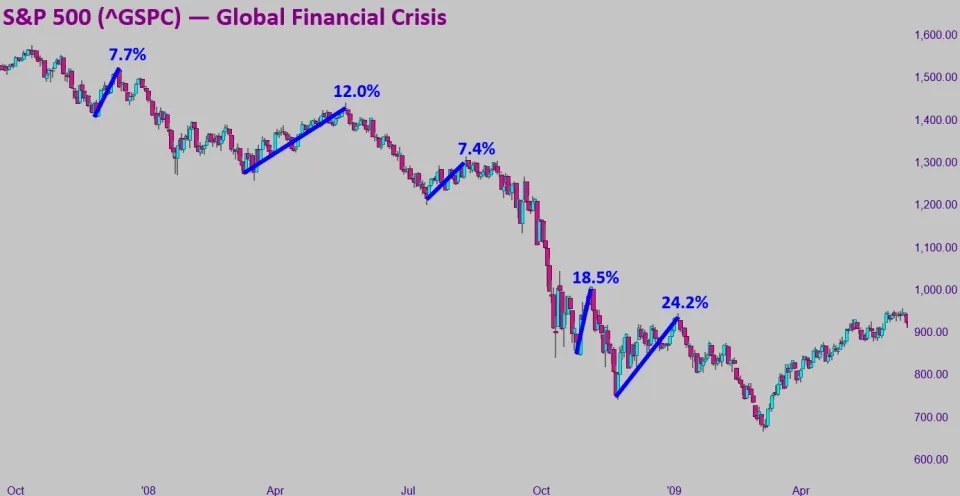 In case you think it’s a more recent phenomenon or not common, here’s one from the Great Depression that took YEARS to work through. [3] 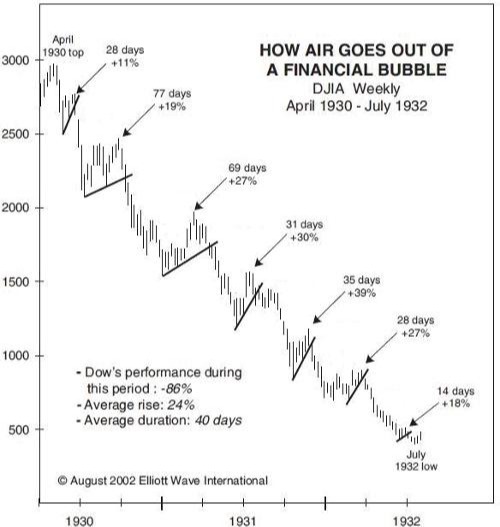 Unfortunately, it’s impossible to tell in the moment whether it’s a bear market rally or the first step of the new bull market. Just after what’s shown on the previous two graphs is the next bull market; after having lived through all the hopes of a rally being dashed multiple times, it would be pure luck to say “this is the real bottom” and invest. Somebody will get lucky, call the bottom correctly, and be forever praised on CNBC. The vast majority who get it wrong will be forgotten to the annals of time. We'll only truly know in hindsight when it’s too late to make a decision.

So, we recognize this is normal to have disappointing bear market rallies. It’s a feature, not a bug. Market history shows that returns tend to be good on average even a year out from the start of a bear market and so we continue to position portfolios to try to take advantage when things do turn around.

Last quarter, we started discussing why we hold the stocks we do. Before doing that again, I’ll start with the same disclosures as before:

[3] Source: 7 Weeks of Rally, Did it Put You to Sleep? (tradersdaytrading.com)

[4] I say “similar” because we customize portfolios based on differing goals, risk tolerances, and timing of transactions. So, the size of positions and account performance, both in absolute and relative terms, will be different.

The Standard & Poor's 500 Index is a capitalization weighted index of 500 stocks designed to measure performance of the broad domestic economy through changes in the aggregate market value of 500 stocks representing all major industries. The Dow Jones Industrial Average is comprised of 30 stocks that are major factors in their industries and widely held by individuals and institutional investors.