Last year was a rough year, the worst since the financial crisis of 2008, and the seventh worst since before the Great Depression. With inflation running out of control for some items, especially food (over $5 for 12 little eggs!!), budgets have been stretched. Due to that inflation, the Federal Reserve has been raising interest rates more often and much higher than anyone expected. This, in turn, causes higher borrowing costs which eat into a company’s earnings and causes the calculated intrinsic value of a stock to go down in analyst calculations[1]. None of that is positive for the markets.

Looking at the market, everything seemed to have flipped on its head. Growth stocks previously outperformed value stocks but last year, that reversed. This sector quilt breaks down the returns of the S&P 500 by sectors since 2008 [2]. 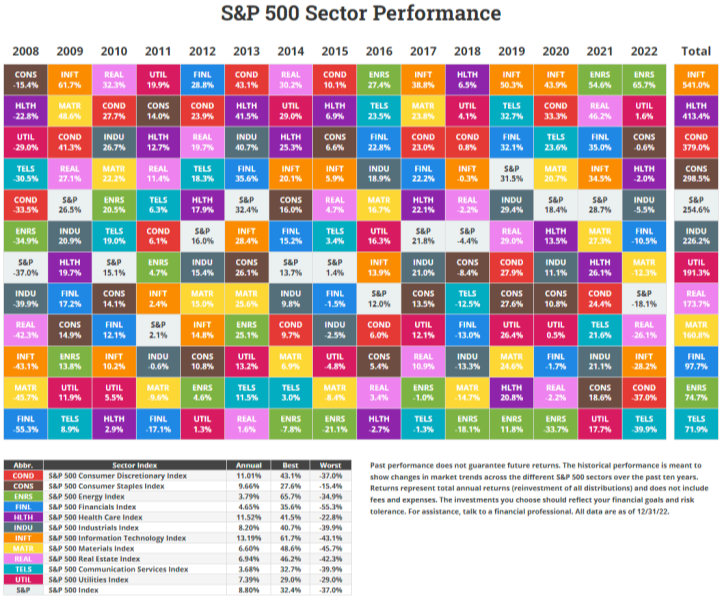 The picture might appear small if you are on a phone or tablet, so I’ll reference colors as well as the sector names. In 2021 and continuing into 2022, Energy (green) was the best sector. Prior to that, it underperformed the overall market (white) in every year but one from 2012 to 2019 and was the worst performing sector many of those years. That’s what happens when you go from oil futures closing in the negative one day in 2020 to some of the highest prices in the last decade.

On the other end of the spectrum, the Technology sector (orange) outperformed the overall market every year from 2014 to 2021. I remember in 2018 chatter on CNBC where the pundits wondered if the tech outperformance of 2017 was done and people should move to other sectors. Looking at the next three years, that would have been a bad idea. For 2022 though, it was one of the bottom sectors [3].

So what is my prediction for this year? As Yogi Berra said, “Making predictions is hard, especially about the future.” I’ve heard predictions by some that we’ll have more volatility to start this year and then things should pick back up toward the latter half of the year. That’s as good of a prediction as any, but I don’t plan on putting much stock in it.

Why not? The average analyst forecast at the end of 2021 for last year was for the S&P 500 to GAIN a modest 7.5% [4]. Instead, we ended 2022 down 18.1%. This is an average of many different predictions from armies of analysts at big financial firms using massive arrays of Excel spreadsheets with tons of data points. If anyone has the ability and resources to get it right, it would be them and they missed by a lot [5].

I don’t bring that up to belittle them since as I said, making predictions is hard. We didn't even expect being down 18%! But there are two long-term predictions that I do feel comfortable in making.

The first prediction is that the market will likely start to recover before the economy does. Unfortunately, we don't know when that will happen. As you can see from the below charts, history shows that the market (dashed blue line) tends to bottom before earnings, payroll, and GDP (the other lines) [6]. 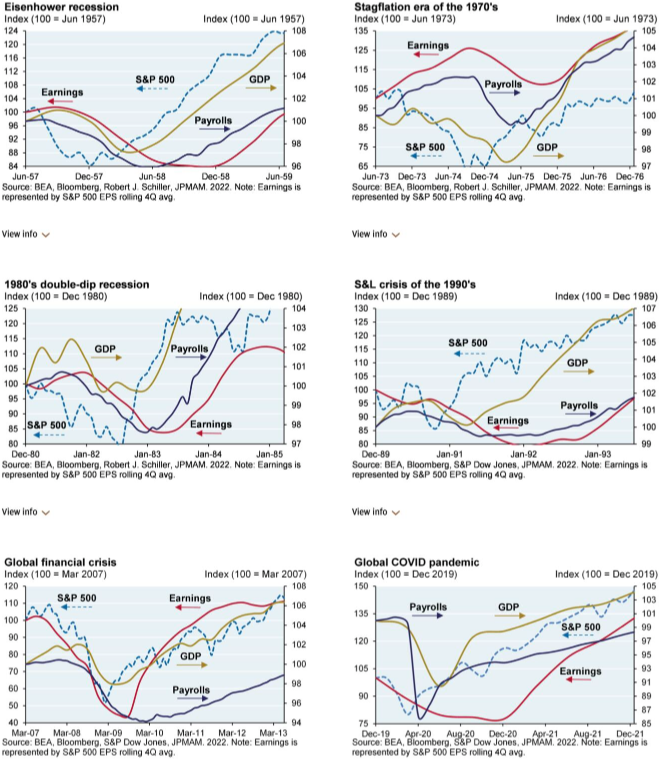 As I said in a previous article, the market begins to recover when times feel the worst and then it climbs a “wall of worry” as Wall Street recovers before Main Street feels it. That’s why we don’t try to time in and out of the market. If you sell when things feel the worst and buy when things feel good, you end up buying high and selling low – the exact opposite of what you need to do to make money.

The second prediction is that the market will eventually recover as it always has historically and the good years will exceed the bad ones. The chart below shows annual returns for the market from 1926-2021 [7]. 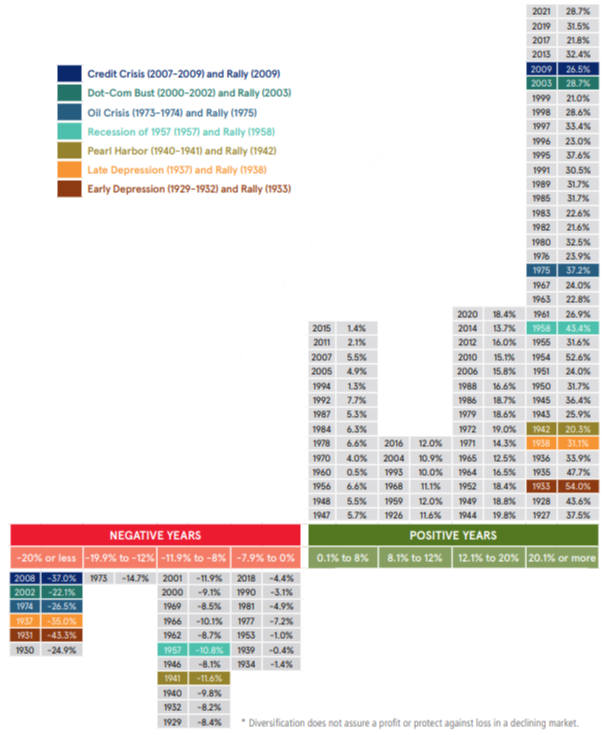 It hasn’t been updated for 2022, but last year would add one more box in the second red column. We can see from the chart that the market rarely (almost never!) ends at the average 8-10% that we use for annual return numbers. As hard as they are to deal with, large up or down years are the norm, not the exception. Secondly, the positive far outweighs the negative. The market is much more likely to be up than down at the end of a given year. Most down years are less than 12% down while most up years are more than 12% up. Other versions of this chart split that last column into two to look nicer, but I chose this one because it's more accurate and makes a point: we’re six times more likely to be up more than 20% than be down more than 20%!

We took our lumps last year and we might take them again this year. I too am tired of seeing red on my account statements. But, we don’t want to make poor investment decisions while the market is down and emotions are high. Long term, I am optimistic about the economy and the stock market. If I wasn’t, we would find other investments for you (and me!)

Before our quarterly holdings discussion, I’ll start with the usual disclosures:

[1] Without getting into the weeds, when analysts use a higher interest rate in their time value of money calculations, it lowers the present value of future earnings, cash flows, etc. As a result, the company is deemed less valuable and so is the stock.

[2] The source has an interactive version if you are on a computer: https://novelinvestor.com/sector-performance/

[3] It’s even worse when you consider that they shuffled companies around in 2019 to move some of the tech stocks like Netflix, Alphabet (Google’s parent company), and Facebook into the Communications Sector (light blue) which was the worst performer last year.

[5] To be fair, I’m sure there were a few bears that called it correctly, but the vast majority of analysts didn’t. And, those bears were probably wrong in previous years when the doom they predicted failed to happen.

[8] I say “similar” because we customize portfolios based on differing goals, risk tolerances, and timing of transactions. So, the size of positions and account performance, both in absolute and relative terms, will be different.